AT&T Stadium opened its doors in 2009 as the new home of the NFL's Dallas Cowboys. One year after its opening, it became the site of the annual Cotton Bowl Classic for NCAA football. Originally called Cowboys Stadium, it was primarily intended to be a football venue, though it is a frequent host of concerts and other major events and is equipped with a retractable roof to allow for such versatility. It can accommodate a staggering 105,000 people.

AT&T Stadium is located just outside of Dallas at:
1 AT&T Way Arlington, TX 76011

The official AT&T Stadium seating chart will vary depending on the event. See the standard configuration for Dallas Cowboys games below. 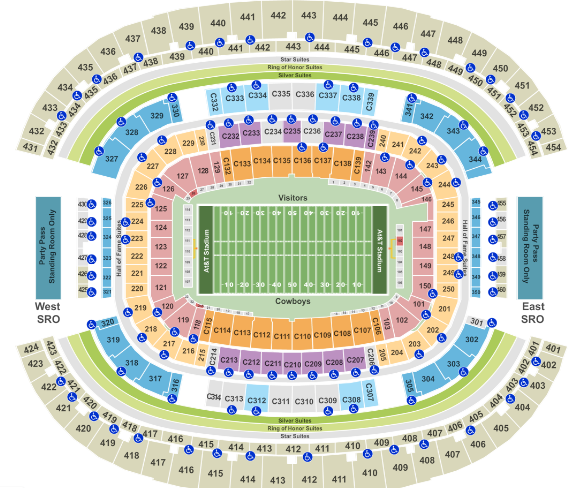 As indicated by the seating chart above, wheelchair accessible seating is located in dozens of sections across all levels of the stadium. All wheelchair seats guarantee guests unobstructed views of their event, and may be purchased with adjacent companion seating. The stadium is equipped with a number of elevators which provide access to all public areas of the building for guests with limited mobility. Additionally, a complimentary shuttle service is provided to and from the stadium from handicapped parking areas.

AT&T Stadium has eight distinct types of suite seating, with over 300 suites in total across the stadium. These luxury accommodations can fit between 18 and 52 guests, and feature top-notch amenities including private restroom, reserved parking, wet bar, televisions and Wi-Fi connection. Suite ticket holders will also be granted access to VIP lounge areas.

While at AT&T Stadium, guests can chow down on a wide variety of concession options, including many game-day favorites like nachos, wings, and pizza slices. Cowboys fans can stock up on official apparel at the team's on-site Pro Shop, which is open daily, though mobile merchandise stands can also be found at various locations around the stadium during events. ATMs are also located throughout the stadium for guest convenience.

15 parking lots are located on the grounds of AT&T Stadium and are available for use during all events, as well as a number of nearby lots which combine for over 24,000 total parking spaces. Parking lots open five hours before Cowboys games, though may vary during other stadium events. Tailgating is permitted in parking lots as long as guests abide by safety regulations, which prohibits open flame fires, weapons, and amplification systems.