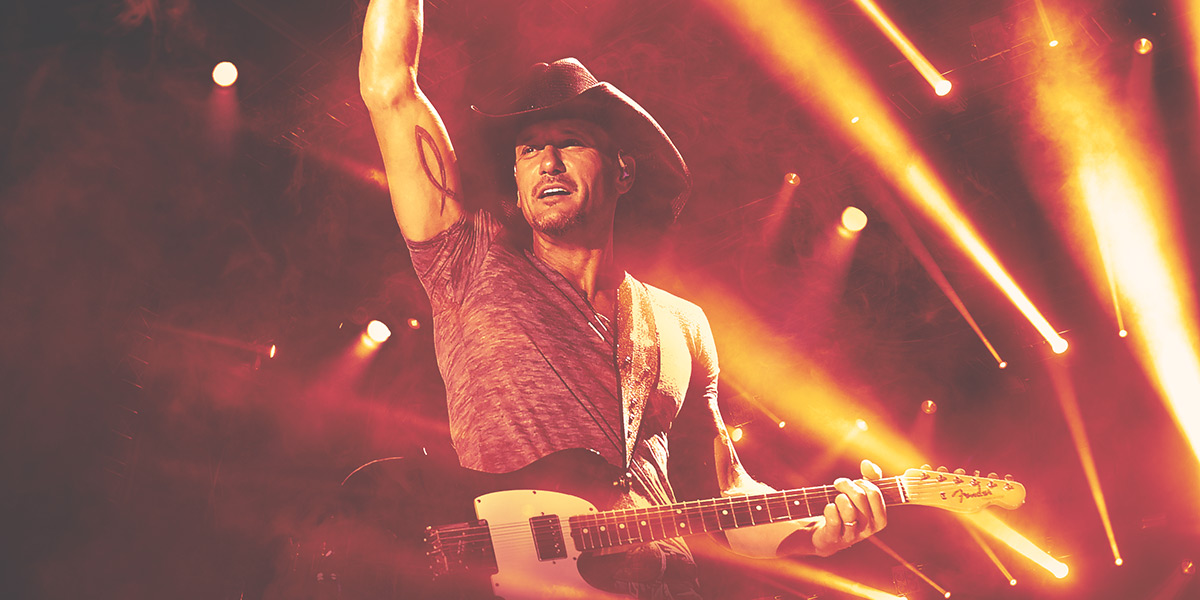 Find Tim McGraw Tickets Near You

Our ticket pages are sorted into two sections. At the top, you will see Tim McGraw tickets near your current location (or whichever location your device is set to), followed by all general Tim McGraw tour dates. If you'd like to search by a different location, you can adjust it at the top of the screen.

Tim McGraw launched his remarkable career in the early 1990s and quickly became a force in country music. He dominated country radio for the remainder of the 90s with several albums that each went multi-Platinum. McGraw's success did not slow down in the 2000s as he released five more albums that achieved cross-over success, including 2004's Live Like You Were Dying, which was the year's best-selling album. He also embarked on one of the highest-grossing tours in the genre when he set off with wife Faith Hill on their Soul2Soul II tour. Over the course of his impressive career, Tim McGraw has been the recipient of multiple Grammys, Country Music Association Awards, American Music Awards, and Academy of Country Music Awards.

Tim McGraw has dominated radio waves and streaming services with several No. 1 hits. Among them are "I Like It, I Love It," "Don't Take the Girl," "Something Like That," "Just to See You Smile," "Live Like You Were Dying," "Last Dollar (Fly Away)," "Southern Voice" and "Humble and Kind." He has also teamed up with artists like Taylor Swift, Florida Georgia Line and Kenny Chesney for hit collaborations. However, his biggest collaborations are with wife Faith Hill. The couple's most beloved duets include "It's Your Love," "Meanwhile Back at Mama's" and "Speak To a Girl."

Want to get up close and personal with this music superstar? Tim McGraw floor seats are available at almost every show. While these premium seats are some of the most in-demand tickets, Ticket Club Premier members can save on cheap Tim McGraw tickets with no fees.

As one of the most consistent performers in music, Tim McGraw is always adding shows to his schedule. You'll find all Tim McGraw tour tickets on Ticket Club now, so don't miss your chance to see the latest Tim McGraw tour.