They’ve been making music for over 30 years and have become one of the world’s biggest rock bands. See why millions of people around the world can’t get enough of Guns N’ Roses. Grab your Guns N’ Roses tickets from Ticket Club and save big. 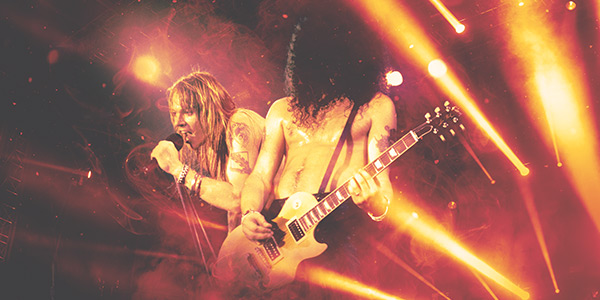 Our ticket pages are sorted into two sections. At the top, you will see Guns N’ Roses tickets near your current location (or whichever location your device is set to), followed by all general Guns N' Roses tour dates. If you'd like to search by a different location, you can adjust it at the top of the screen.

Guns N’ Roses launched their career in the mid-1980s building on the influence of other rock heavyweights like the Rolling Stones, Led Zeppelin, Aerosmith, Queen, The Who and AC/DC. By 1987, they became one of the genre’s most talked-about and commercially successful bands following the release of their debut album Appetite for Destruction. The record shot to the top of the U.S. chart bolstered by the success of singles “Welcome to the Jungle,” “Sweet Child o’ Mine” and “Paradise City.” Appetite for Destruction has since become one of the best-selling albums of all time and made Guns N’ Roses a household name.

The pioneering band – currently comprised of frontman Axl Rose, guitarists Slash and Richard Fortus, bassist Duff McKagan, drummer Frank Ferrer, and keyboardists Melissa Reese and Dizzy Reed – have played some of the biggest venues in the world and have been praised as one of the most influential American rock bands in history, earning accolades like American Music Awards, World Music Awards and MTV Video Music Awards. On top of that, they solidified their place in music with their 2012 induction into the Rock and Roll Hall of Fame.

Guns N’ Roses collection of classic rock hits includes “November Rain,” “Don’t Cry,” “Patience,” “Paradise City,” “Welcome to the Jungle” and “Live and Let Die.” However, they are perhaps best known for their Platinum-selling No. 1 single “Sweet Child o’ Mine.”

Want to get up close and personal with this legendary band? Guns N’ Roses floor seats are available at every show and in most cases, so are Guns N’ Roses VIP ticket packages. While these premium seats are some of the most in-demand tickets, Ticket Club Premier members can score cheap Guns N’ Roses tickets with no fees.

With millions of fans around the world, Guns N' Roses are frequently touring. Find all Guns N' Roses tour tickets at Ticket Club now, plus additional performances as they are announced.