As millions prepare their Turkey Day feasts, the NFL is prepping for its 100th season of Thanksgiving Day action. And just as they do most years, the Dallas Cowboys are once again on track to dominate all Thanksgiving NFL ticket sales.

The Cowboys are undoubtedly the most popular team to take the field on Thanksgiving Day. Per Ticket Club sales data, they’ve been the best selling Turkey Day team for six of the last seven years. Dallas was only outmatched in 2015 when the Bears took on the Packers in a blockbuster rivalry game. The Detroit Lions’ annual Thanksgiving game is routinely topped by Dallas, and is on par with whichever teams make up the rotating third game of the day. 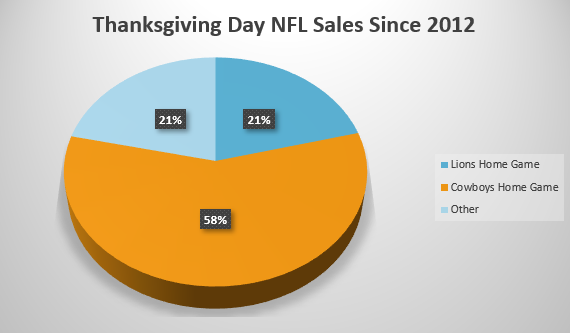 While America’s Team garners the most fan support on Thursday, the remainder of the holiday weekend belongs to a slew of teams leading the sales pack. Specifically, the Chiefs, Packers and Patriots, each of whom have headlined three of the best-selling Sunday games immediately following Thanksgiving since 2012.

All three squads have traded off being the Sunday strong seller, while the Broncos played in the best selling game twice and Giants once. The Chiefs have recently taken the reins as one of the NFL’s best-sellers and are on track to have the weekend’s top game this year when they face the Raiders at home.

As for the team with the highest cost per ticket? That stat handily belongs to the reigning Super Bowl champs, who pulled the highest average ticket price on Thanksgiving weekend for five of the last seven years. 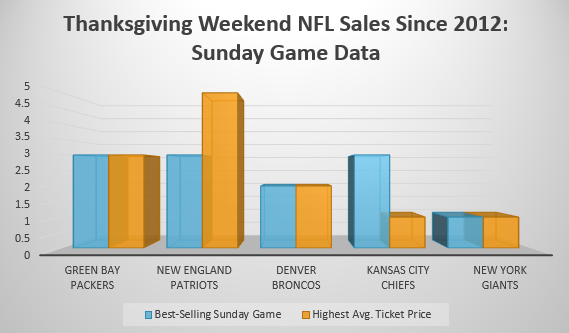 While the Patriots consistently notch the highest ticket prices to late November games, the entire league sees a spike in average ticket cost on Turkey Day. Thanksgiving Day games have routinely cost fans more than the remainder of the holiday season. Compared to games taking place the Sunday following the feast, as well as those played during the weeks of Christmas and New Years, Thanksgiving Day NFL tickets go for noticeably higher.

In 2012, the average price to attend a Thanksgiving Day game was $128, though that number steadily climbed each year to reach a high of $235 in 2015. While the average cost has leveled off in recent years, it still remains higher than other holiday-laden games. As they stand right now, Thursday’s games are selling for $186 per ticket, while Sunday’s match-ups go for a collective average of $164. Next month, games taking place between December 21-23 and on December 29 see tickets going for an average of $172 and $160, respectively. Of course, those figures could change as playoffs loom. 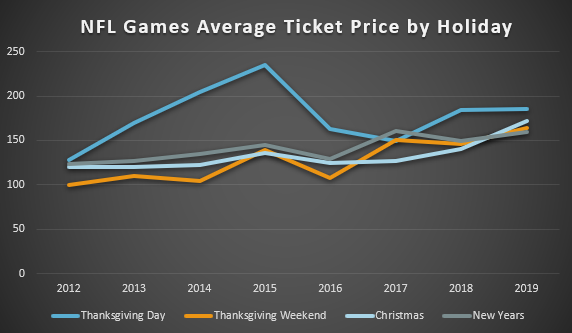 If you’re looking to spend an upcoming holiday at a game – or giving the gift of NFL tickets – we’ve got you covered. Find all upcoming NFL tickets here to reserve your spot in the stadium as the season draws to an exciting close.