Has the novelty behind the Warriors-Cavaliers rivalry finally worn off? It certainly seems that way, as NBA Finals ticket prices are on the decline ahead of the fourth consecutive meeting between the Cleveland Cavaliers and Golden State Warriors, according to recent data.

Both squads were forced to battle in tough Conference Finals series that went the distance. LeBron James lit up the court to help the Cavs overcome an early deficit to squander the Celtics’ chance at the Finals, whereas the Warriors found their form to outlast Western Conference top seed Houston. Speculation had been building throughout the playoffs of a possible fourth Warriors-Cavs clash in as many years. However, the prospect initially seemed unlikely, given an influx of injuries on the Warriors bench and the Cavs earning the Eastern Conference’s fourth seed after finishing the season 50-32. All the while, ticket trends had favored fans of the rivalry with lower prices occurring all throughout the playoffs and once again now. 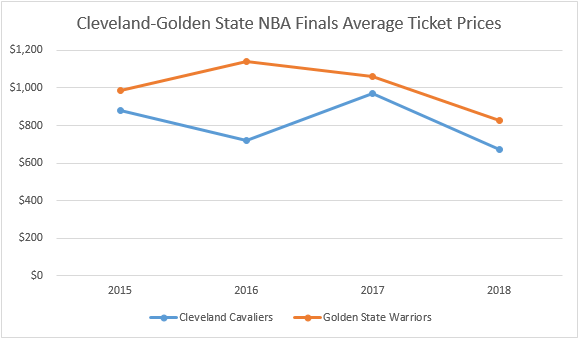 This ongoing rivalry started in 2015 with both teams relatively evenly priced. Warriors fans dished out $984 for tickets on average during their 2015 Finals run, while Cleveland locals spent around $100 less, averaging $878 per ticket. The following year, when LeBron and the Cavs were finally able to hoist the trophy, Cleveland home games dropped in average ticket price to $721. On the other hand, Dub Nation saw home game average prices soar to over $1,100 in hopes of seeing a repeat victory. Last year accounted for a much smaller price gap, with both teams’ Finals ticket averages hovering around $1,000.

Fast forward to mere hours before tip-off of battle number four and you’ll find far lower figures. The Warriors see an average ticket price across all games in this year’s Finals at $825 – the Cavs fall even lower than that at $674. Both figures are the lowest ticket averages of the past four years. Even in the lead-up to Game One of the series, prices are on a steady fall.

With the exception of a potential Game Seven decider, minimum “get-in” ticket prices for every game in the NBA Finals fell substantially within a 48-hour period. Golden State home games continue to be the more expensive of the series, but are still down considerably compared to “get-in” prices from previous years.

Early predictions point to the defending champs Warriors walking away with the title once more while Steph Curry is among the most likely of potential MVPs, along with teammates Kevin Durant, Klay Thompson, and Draymond Green. LeBron James is rightfully also in that mix, though Cleveland is running on an underdog’s momentum into the Finals, as evidenced by the cost to see them play at home.

Historic rivalries have proven great for sports, from the Yankees-Red Sox and Giants-Cowboys to the Cavaliers-Warriors. But when the same teams have a constant presence duking it out for a championship ring, the excitement understandably fizzles out. Take this year’s Super Bowl, for example. With five rings already to their name, the New England Patriots found themselves in familiar territory once more this February, a vast difference from the Philadelphia Eagles, who were in the hunt for their first Lombardi trophy. Such circumstances led to both a steady fall in Super Bowl ticket prices and saw Philadelphia locals make up a majority of the game’s attendance.

A similar case could be made for the ongoing Stanley Cup Finals, which will culminate in a first-time Cup winner in either the Vegas Golden Knights or Washington Capitals. Vegas’ Cinderella story as the expansion team in their first year of existence making a stellar run to the finals is enough to boost ticket prices. Add in the fact that Washington has never won a Stanley Cup either and are 20 years removed from their last Finals appearance adds to the magic. Ticket prices have skyrocketed across the board for the series given the historic circumstances.

Will the market pull a fast one and see a rapid rise in NBA Finals ticket prices as the series unfolds? We’ll continue to monitor the trends throughout the finals to help determine whether this rivalry has begun to slump or if it’s not yet reached its peak.