Super Bowl LIII is right around the corner, with just four sleeps to the big game in Atlanta between the New England Patriots and Los Angeles Rams. But what does the market for Super Bowl tickets look like? After speculation that the bottom would fall out due to the matchup (Patriots have gone so often and Rams are too new in their market to have a big travelling contingent being the prevailing wisdom), things have actually been fairly stable as the final days tick away.

Currently, the average price paid for tickets to the big game is $3,809, which is the third highest over the past 10 years of Ticket Club data: 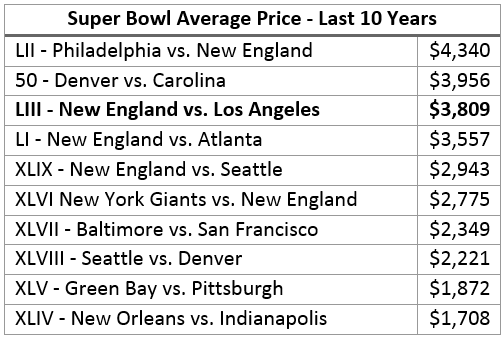 How Much Will a Super Bowl Ticket Cost?

If you’ve been holding out on grabbing tickets for the big game in hopes of a market collapse, it looks like that may be in vain, as the market has stabilized over the past few days. 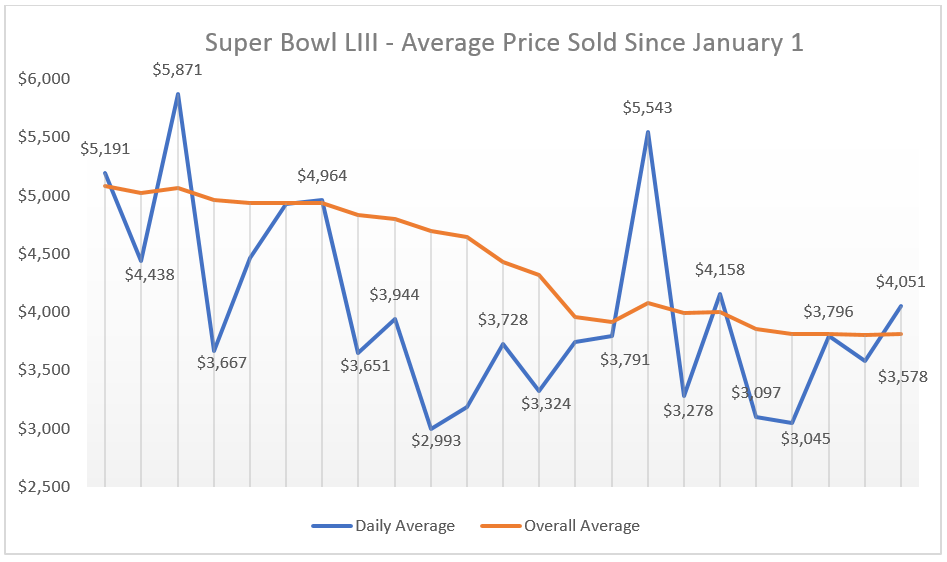 Compared to prior years, the flattening of the trend line is notable. While SBLIII tickets were selling at a lower average than three recent games (LII, 50, and LI) at 14 days to kickoff, the average has stayed nearly static over the previous five days. 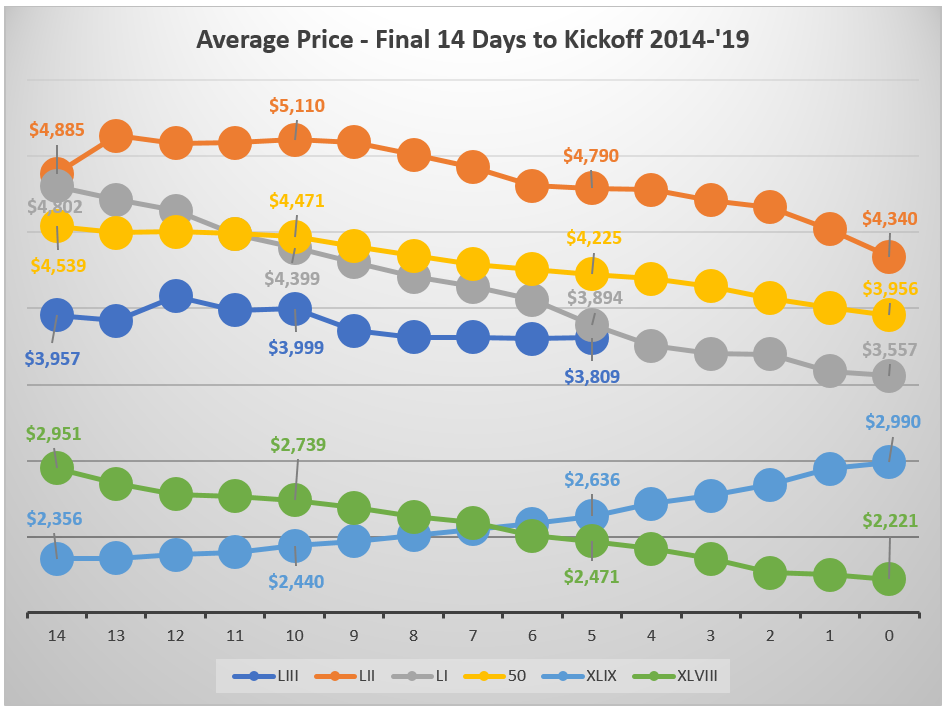 Given that every game in recent memory has seen the average price fall in the final few days before the game, it’s likely that will still happen this week. But as you can see, the drop in average price from 10 days to 5 from kickoff is far smaller for Sunday’s big game. It has slipped by 4.8%, which is a smaller drop over the same time frame than all but one of the last six championships. Only Super Bowl XLIX, which saw its prices explode near gametime as available inventory disappeared, fared better, jumping by 8%. Last year’s game in Minneapolis – the record for highest average price at $4,340 when all was said and done, dropped by 6.3% in the same span.

As of Wednesday morning, the get-in price for the game for a member of Ticket Club stands at $2,834, good for a seat in the upper corner of Mercedes-Benz Stadium. The median price for all listings on Ticket Club – which has no service fees for members – is $4,358.

For those looking to really splurge, tickets in the Suntrust Club at midfield behind the Patriots sideline are going for $28,350. That’s well beyond the $11,550 it’ll cost for a ticket in the AMG Lounge, located at midfield behind the Rams sideline. There are also some full suites available for those of us who have lots of friends with fancy tastes and accounts to match. One of those is available for $236,250 – not so bad when you break it out at just over $10,700 per person for the 22 folks you could bring along.

As mentioned earlier, much was made of who might show up for this game. New England fans have been able to watch their team play for the Lombardi Trophy five times in the last 10 years. This game marks the third straight trip for Tom Brady and Co. So the potential for limited northeasterners with Super Bowl still left on their bucket list is high. On the flip side, the Los Angeles Rams just got back to that market two seasons ago after a generation in St. Louis. Would their partisans be game for the cross-country flight?

As you can see on the purchasing map, Massachusetts, California and Georgia have been the strongest in terms of who’s buying tickets to Sunday’s game. Massachusetts residents have bought up close to 16% of the total available tickets, outpacing California at 13%. Georgia is No. 3 with 12% of the market for folks taking advantage of the luxury of being able to get to the stadium without buying a flight. When you add up the likely “support” angle, it looks like New England may have a distinct advantage – buyers from New England states account for 23% of all tickets bought thus far. 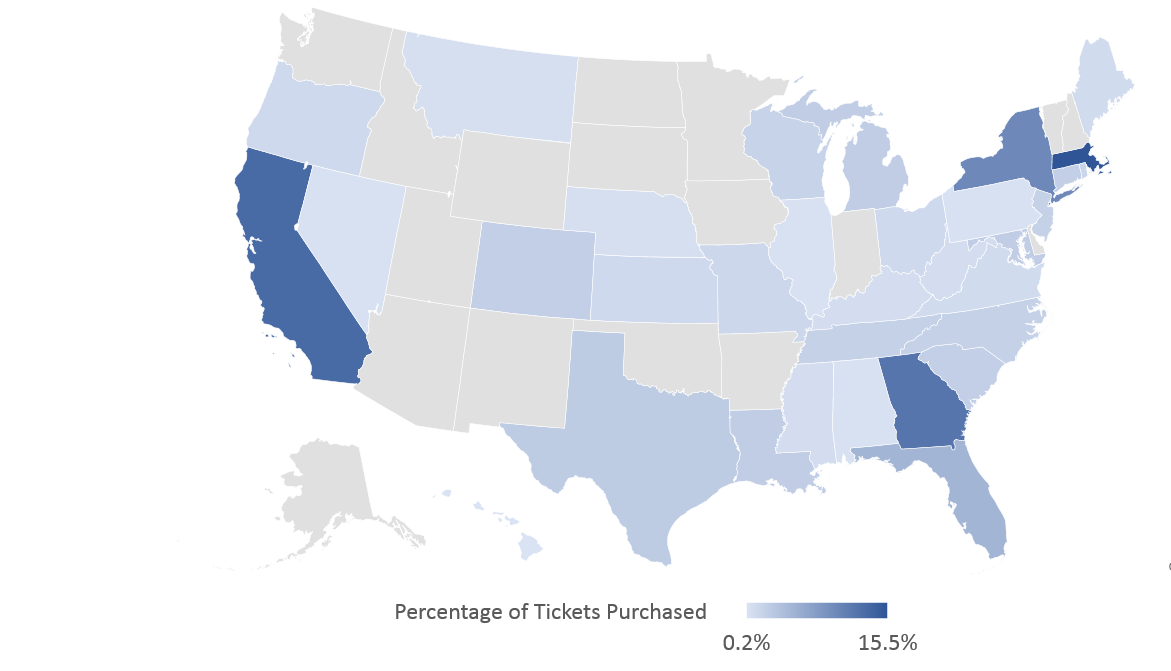 This trend is also illustrated in the get-in prices for seats on the teams’ respective “sides” of the stadium. Tickets for sections on the same sideline as New England are 24% more expensive than similar tickets on the Rams side. Even if you take out the massive difference in price of the AMG/Suntrust Club seats (145% more expensive for Pats fans), the Patriots side of the building is an average of 9.4% more expensive. There is only one level of seating – Mezzanine Sideline – where the Rams half of the building is going for a higher minimum price.

Where can Fans Find the Best Deal?

Thankfully, this one is easy. As per usual, Ticket Club is the best game in town for tickets to Super Bowl LIII, since our members don’t pay service fees.

For a more direct comparison, lets take a look at tickets in the lower endzone. On Ticket Club, a pair in Section 119, Row 37 are available to members for $4,463 per seat. In the same section and row, those tickets are $5,446 on StubHub and $5,237 on Vivid Seats. That particular row isn’t available to compare on either Ticketmaster or On Location, but the get-in for that section is higher than Ticket Club’s on both marketplaces.

One thought on “Super Bowl Tickets – Who’s coming to Atlanta and for how much?”